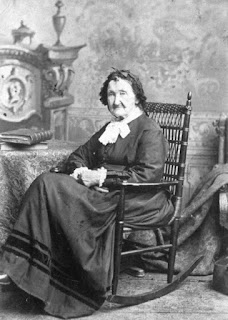 was born in on 15 Sep 1802. Her parents were Samuel Wilson and Sarah Ann Gregg. Miss Wilson married William Ramsey Holliday on 7 Feb1822 at , . The couple made their permanent home ten years later in .

had seven children: three girls and four boys. Her youngest son, John W Holliday, served as a Sergeant in Company G of the 2nd Ohio Infantry Volunteers from 1861 to 1862, when he was promoted to 1st Lieutenant & Adjutant 15th West Virginia Volunteers. He attained the rank of Lt. Colonel, was wounded at the Battle of Cedar Creek, and suffered an attack of typhoid fever during his service. Several letters handwritten by J.W. Holliday are preserved in the “West Adjutant Generals’ Papers 1861-1865” of which I have copies. Her sons William Wilson and Thomas J also served the .

According to an article describing the life and descendants of Lydia Holliday in the monthly publication “The Echoer” dated 1 Aug 1970, she began her work as a volunteer field nurse in the hospitals of the Union Army in the spring of 1861. She was nearly 60 years old.

“…she began her work by first appearing at (sic) on . This was a camp for the mobilization of raw recruits from the northern states. Many of the soldier boys had few or no clothes. Commissary and quartermaster arrangements were inadequate. (Lydia Holliday) unselfishly stripped her home of its furnishings to help allay their privations. Soon the sick and injured began arriving from the front. They were placed in improvised hospitals in the Sprigg House (now the Windsor Hotel), and in the Athaneum, later a military prison where Confederate soldiers taken prisoner were confined. Here, she could be found relieving their suffering” (The Echoer). She later spent time nursing “her boys” at and , and became known as “Mother Holliday”. 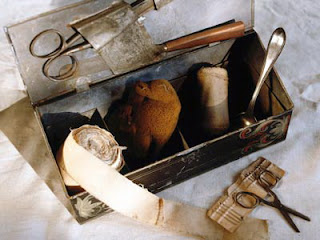 After the war, was active in the Woman’s Relief Corps, an auxiliary to the Grand Army of the Republic. The G.A.R. post was named after her son John. She was also active in the local chapter of the Woman’s Christian Temperance Union remaining a contributing member of the community throughout her long life.

Mother Holliday was a kind and simple soul who sent three sons to war and decided to offer her nursing skills to and Confederate soldiers alike without compensation.
During her later years, as a widow and with only three of her seven children living, she became destitute and in need of financial support. At age 90, she “made a declaration for the purpose of being placed on the pension roll of the ” (National Archives Pension File, 5 Aug 1892). As she had not been officially hired by the medical service, her pension was initially denied. Along with her personal declaration, four others (including a military physician and a Lt. Colonel) who knew of her work offered affidavits to her cause to the State of .

On 23 Feb 1897, “An Act Granting a pension to Lydia W Holliday” was passed by Congress:
“Be it enacted by the Senate and House of Representatives of the United States of America in Congress assembled, That the Secretary of the Interior be, and is hereby, authorized and directed to place the name of Lydia W Holliday, of Wheeling, Ohio County, West Virginia, late army nurse in the army hospitals of the United States Volunteers, in the late war, from eighteen hundred and sixty-one to eighteen hundred and sixty-five, on the pension roll, at twenty dollars per month from and after the passage of the Act” (National Archives).

She died 5 Oct 1899 of “old age and prostration” per West Virginia Death Records.
She was 97 years old. She is buried next to her husband among many members of her family at , . It is a small, rambling cemetery on a hill overlooking the . Rest in Peace from your thankful 3rd great-granddaughter, also a nurse. 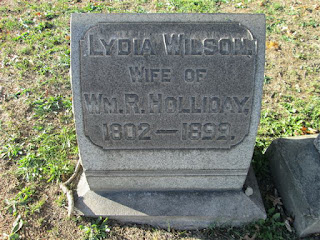