My maternal great-grandfather, John O'Malley, along with his wife, children, and his wife's parents, arrived at Castle Garden, New York, in 1868. He died a widower, alone in a city far from the land he farmed in Minnesota, and farther still from his homeland, Ireland. I am his great-granddaughter and this is his story.


John O'Malley was born in Ireland, probably in Cork county, in about 1838. His parents were John & Johanna. The first document placing him in a specific location is the 1851 English Census where he is living with his parents, sister Ellen, and Ann Bradly, lodger, in Liverpool, Lancashire. As we learned in school, the blight of the potato crop in Ireland left millions of Irish to starve, die of disease, or emigrate during the mid-19th century. Across the Irish Sea, Liverpool was a busy port city, with work on the docks for unskilled laborers like many poor farmers escaping the famine. The 1861 English census lists a young John O'Malley as a lodger with the occupation of baker; his parents lived nearby. Two years later, John was living in Wolverhampton, Staffordshire, where he married Ann Moughan/Morgan on the 13th of September, 1863, at the Catholic Chapel on Oxford Street. Here he worked as an iron brazier. The couple began a family that would grow to 13 children with only 8 living by 1900.

The Irish immigrants who chose to go to England found employment in the expanding industrial centers such as Wolverhampton. Creating and improving the transport infrastructure in the area allowed for enough work for both the local population and the new arrivals. 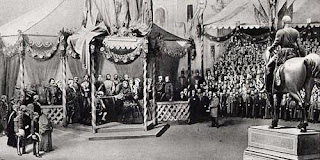 Before they left Wolverhampton, the family experienced an exceptional event; an 1866 visit from Her Royal Majesty Queen Victoria on the occasion of the unveiling of a statue of her late, beloved consort, Prince Albert. Here is an image of the festivities with the Queen, in her black mourning attire, standing under the portico where she appears to be involved in a Knighting Ceremony.


In 1868, the family emigrated to America aboard the good ship Clara Wheeler, landing at Castle Garden, New York. The passenger list includes John, his wife Ann, children Mary, Catherine, and Sarah, Ann's parents Patrick and Catherine Morgan, and their daughter Margaret. Williamsburg, Brooklyn became their first home where the O'Malleys shared accommodation with ten other families. John worked as a moulder, according to the 1870 Federal Census. In 1872, John O'Malley completed a Letter of Intent to become a United States citizen at the New York Court of Common Pleas.

America was attractive to Irish immigrants for a number of reasons. Opportunity for success was a prime factor. In 1862, the Homestead Act was passed to attract farmers to unsettled land in the Midwest, and the rise of the railroads made the trip faster, easier, and safer. This Act was intended to "secure homesteads to actual settlers on the public domain", but the free land came at a price. There was a charge to file the original application. Once the family acquired the property, the expenses added up quickly. There were building materials, tools, and farm implements to buy; cattle, horses, chickens, and swine to procure along with food and shelter for the animals; kitchen ware, bedding, and seeds for planting to purchase. Settling the prairie was not for the faint-hearted or unmotivated. The entire family would be needed to make the eventual ownership of the land a reality. My O'Malley ancestors were hardworking folks who fashioned a new life for themselves despite the frigid winters and erratic nature of farming in Minnesota.


By 1875, the Morgan's and O'Malley's had relocated to Winona, Minnesota. Under the Homestead Act, John was granted 74 acres of land in Murray County in the southwestern part of the state. Here the family lived and worked the land until a Final Certificate of Land Ownership was granted in August 1884. His final oath of citizenship was taken only two months prior, in June 1884. So, by August, the requisite five years of residency, improvement of the land, and final affidavit was complete. To secure his farm, John O'Malley testified, "Built house and commenced actual residence therein April 15 1878. House is 16x16 feet, one story high with shed 10x16 feet, shingle roof, board floor with doors and windows, stable, well, and about 32 acres of breaking (grew crops for six seasons), worth $250". The testimony of two witnesses, David Stafford, Hardware Merchant, and D.H. Evans, Farmer & Machine Agent, verified these facts.
His American dream came true.

In 1903, John's wife Ann died from complications of an infection received when she stepped on a rusty nail. She died at a Minneapolis hospital, and was buried in Calvary Cemetery, Currie, Murray, Minnesota. The farm was sold and John moved yet again, across the country to the Portland, Oregon area. Ann's niece, Margaret May Dooney, and her brother-in-law Thomas Malloy lived nearby, but all of his daughters lived elsewhere. It is a mystery why he did not move closer to one of his children. According to census records, he lived alone and died in 1920 of angina pectoris. He was buried at Rose Hill Cemetery in Portland.

May my great-grandfather Rest in Peace.