My Dad, My Hero

Robert Austin Woodward Cox was born on the 18th of May, 1910, in Dormont, part of the Pittsburgh Metro Area in Pennsylvania. The 1910 Federal Census records the residence. His parents were Frank Elwood Cox and Grace Lillian Synar. Their home, which was newly built at the time of Dad's birth, remains standing at the original address: 2959 Espy Ave.


According to "Our Baby's Journal", their young son's first family outing was to Atlantic City, New Jersey, to see Wright's Air Ship in July 1910. This was also the year that Halley's Comet made a rare appearance. Dad was the youngest child in the family of three sons; John and Fred were his older brothers.

The next document recording the residence of the family is the World War I Draft Registration of Frank Cox. By September 1918, they had relocated to Phoenix, Arizona. The 1920 Census shows another move to Pasadena, California. The move across the country to a milder climate might have been motivated by the ill-health of Grace. According to her 1921 death certificate, Grace died of tuberculosis contracted ten years prior. In the same 1920 Census, the family is living together, and the occupation of the Head of Household, Frank Cox, is listed as "none". No one was working and the boys were ages 13, 11, & 10. The children must have had a difficult time, living in a new town and attending new schools, a sick mother who would die the next year, and an out-of-work father. One example of normalcy is recorded in the 1925 Pasadena High School Yearbook where Robert and his brother Fred were students. Dad never graduated.

In December, 1926, the young Robert would make a fateful decision that would affect the rest of his life, as well as that of his only son and namesake, and to a lesser extent, the rest of his family. Robert A W Cox enlisted in the United States Navy with the consent of his father. The date of the young mans' birth on the consent form is May 18, 1909, making him 17, when in reality he was only 16 years old. Maybe he had grown weary of academia and wanted to get on with his life. Or perhaps he was a poor student, or felt like he didn't "fit-in" with his school mates. Maybe some extra money was needed for the family. Whatever his reasons, and he never discussed much about his past with his children, this was a decision that worked to his advantage.

As an Apprentice Seaman, Dad began his training in San Diego, California, five days after enlistment. A little over one year later, he attended Machinist's Mate School in Hampton Roads, Virginia. This was the beginning of a lifetime spent around machines, and the work seemed to come naturally. In April, 1928 he was assigned to the USS Medusa as a Machinist's Mate 2nd Class, stationed in San Pedro, California. The Medusa (AR-1) was the Navy's first purpose-built repair ship and remained in service from 1924 to 1946. Dad worked in the machine shop onboard. There are no online records of crew lists or deployments prior to 1940. I was able to locate one mention of the ship: during the Banana Wars in Nicaragua, the U.S. military occupied the country. In 1927, the Medusa transported U.S. Marines to Managua alongside the USS Bridge. In May 1930, Dad was honorably discharged from the Navy and served four more years in the reserves. Soon after the Great Stock Market Crash of October, 1929, he prepared for the end of his Naval career in an unusual way; by learning how to fly.

In December, 1929, a Student Pilot's Permit was granted to Robert Cox by the Department of Commerce, Aeronautics Branch. By January, he was enrolled in the T.C. Ryan Flying School in San Diego. According to his application, Cox received ten hours of flying instruction at Wilson's Aero Corp. in Burbank, California. He later would fly his own plane with his oldest daughter (Lea Rae) in tow. She remembers these short, exciting flights to this day. By the time I was born in 1947, the plane was long-gone. Much later, scuba diving was another challenge for Dad and I remember his wet suit hanging in the garage and the diving flag logo on the rear windshield of his car.

On October 6, 1934, Robert Cox and Helen Mae Willis were married at the home of Frank Cox in Sierra Madre, California.The first years of their marriage included many moves, the birth of the first of three children: Lea Rae in 1935, and the establishment of the first family business. The Cox Brothers Richfield Service Station was located in San Pedro. For reasons unknown, the business failed or was sold. A move to Oakland followed, where the City Directory of 1937 lists Dad as a Machinist. Next came a period of unemployment followed by a return to Los Angeles where he worked at Harvill Corporation (a die casting company) as Maintenance Foreman until 1940.

The surprise Japanese Attack on Pearl Harbor, Hawaii, brought the United States into World War II in 1941. Soon, the Cox family would move into their new home at 8121 Truxton Ave, Westchester, Los Angeles. Here they would establish a middle-class household, join the congregation of Visitation Catholic Church where their marriage was officially "Blessed", and the head of the family would begin a new job as General Machinist at North American Aviation, Inc. The nation was gearing up for war and experienced machinists were in high demand.

Now settled in a home large enough for their growing family (two more children were born after the war: Cynthia Ann in 1947, and Robert A. Cox, Jr. in 1954), with the shortages and rationing of the war at an end, another chapter in the Cox family saga began. In 1946, Robert A Cox Die Casting was established and open for business. It gradually grew from a small operation to a significant size; from one building to three, on Knightsbridge Ave, Culver City. Dad took night classes to learn about business law and regulations, management, and accounting. His lack of an early formal education did not deter this determined young man to build a successful business from scratch. It was always a family business with frequent volunteer assistance from mom and the kids. (My job was packaging sprinklers). The original buildings and property have since disappeared under retail development, but the business continues in Gardena, California, under the able leadership of son Robert Cox, Jr, who has devoted his life to his father's legacy. Today, the official name is "Cox Die Casting".

In 1960, for reasons not shared with my brother and I (older sis was married by now), a move to another house was in the planning stages. The weekends were spent traveling to "the valley" (San Fernando) to scope out orange groves. These parcels of land were being sold off for the purpose of building new homes. We searched and searched, finally located the newly developed neighborhood of Ladera Heights in Culver City, and moved into our new home at 5610 Shenandoah Ave. The place was bigger, more convenient to the business, had a wonderful swimming pool, and no stairs! The kitchen appliances were pink with golden-hued wallpaper. There was a room and small bathroom off the kitchen, the "maid's room" (we never had live-in help). Then came a boat, trips to Catalina Island, and membership in the Yacht Club. Dad attended Lion's Club meetings and functions, Mom tended the house, and we joined St. Jerome's Catholic Church. Life was good and the family business was booming.

Dad was happy, Mom not so much. Us kids were busy studying and growing up. Before long, our parents were alone in the big house and Dad was losing his memory. He became confused and unable to control his inappropriate behavior. It was necessary to commit him to a secure facility where he would be cared for and safe. Brittany House in Long Beach was Dad's new home while Mom was transferred to a Skilled Nursing Facility. After a bumpy two weeks, he settled into a single room with his own furniture and television. A lady named Kitty 'fell in love' with him and they spent happy hours sitting together watching TV. Our visits to Dad were encouraging because he was comfortable and content. For the first time in his life, he had little responsibility and no demands on his time. Despite his confusion, he remained in good humor, laughing a lot, as he always did, at the absurdities and pure joy of life. He once remarked, "This place is great! I get to live here, eat meals here, and nobody asks me to pay!". Of course, his stay was paid for thanks to his son who managed the affairs of both parents during the last years of their lives.

My Father and I had a special relationship. I was Daddy's Girl. He took me to school and catechism and picked me up, we went grocery shopping together, and I worked at the shop. He had a wonderful sense of humor, a beautiful smile, was friendly and considerate. Dad didn't lecture or scold. He modeled behaviors that I would emulate including optimism, a solid work ethic, the joy of reading, and family loyalty. He was my hero. 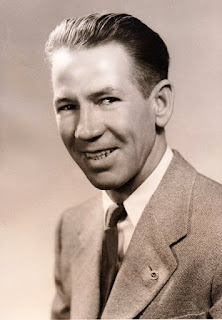 Dad died on February 3, 1995, after being rushed to the emergency room with pneumonia. He had suffered with congestive heart failure and I will forever regret not being with him at the end. I miss you, Dad.